You don’t have to go to Iceland to see the Northern Lights (though it helps).  They can sometimes be visible in Door County, Wisconsin.  Being far enough south makes their appearance rare, but a few times per year they can make an appearance. I am often asked how I know when Northern Lights might be seen.  I use a few different Northern Lights tracking apps for this.  They all do pretty much the same thing but I check them all because they present the information differently.

Whether or not they can be seen depends on a few variables such as solar winds, cloud cover / weather,  and air conditions.  The one I’m going to focus on, arguably the most important one, is the strength of any particular solar activity.  Solar activity is measured on a Kp scale ranging from 0-9.  At a minimum, the Kp level needs to be at 5+ for lights to be seen on the horizon.  And the higher the Kp level is, the better the possibility for a Northern Lights appearance and a good show.

Some of these apps are paid apps.  There might be a free version available for some of these but I’m the type of person who doesn’t have a problem supporting app developers who make apps I use often.  Plus you get extra features with paid apps including the option for push notifications.  Push notifications are really nice because I don’t have to check apps regularly and they will tell me when the Kp level gets high.

These apps also track other variables that affect Northern Lights viewing but I always start with Kp level before worrying about any other variable because if the Kp is not high enough, none of the other variables matter anyways.

If you get one app, this is the one I would get.  It has all the information you will need to track solar activity.  The front page of the app will show you a map with aurora activity right at the top, probabilities for geopmagnetic activity, and Auroral predictions.

I usually look right at Auroral Predictions and take note of any predicted Kp level above 5.

I like this one the best of all the Northern Lights tracking apps because it has the best user interface.  It just seems more polished than other apps I’ve used.

The front page of the app shows the Kp index right now and your percentage chance of seeing them where you are.  Then there is an Aurora Map which is extremely useful.  It shows an aurora overlay on the map and you can plainly see if aurora activity is near you.

The forecasts tab will show you your viewing probability over the next half hour, cloud coverage percentage, Kp probability predictions for the next hour, and long term maximum Kp forecasts.

Aurora Alerts has all the information as the previous two apps so I won’t go in to details about those.  I like the Shrot Forecast Page quite a bit.  Most notably, it tells you your percentage change of seeing the Northern Lights both overhead and on the horizon.  This is helpful for Door County Northern Lights viewing because we almost always only see them on the horizon. 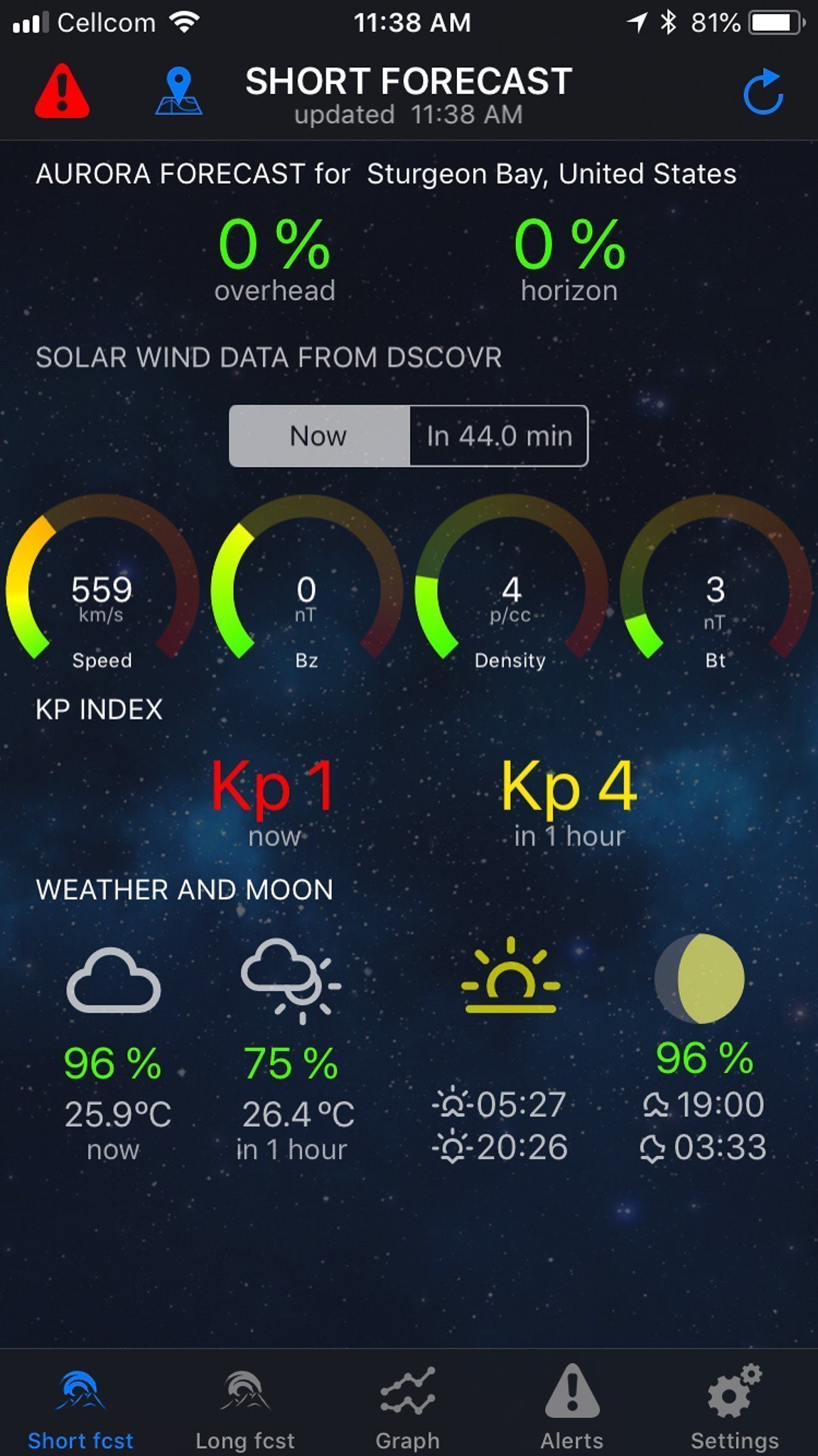 This is not a aurora tracking app, obviously, but it is probably one of the most helpful ways to be notified of aurora activity.  The page Aurora Alerts by Soft Serve News does a great job letting the world know about upcoming solar storms.  When I see a post from them pop up on my feed, I know to pay closer attention to the Kp level.  To help me see their posts I enabled notifications whenever they post.

There are other pages and groups dedicated to Northern Lights hunting so I recommend doing a search for those.  Great Lakes Aurora Hunters Alerts is a good page to follow for Great Lakes based alerts.

Using these Northern Lights tracking apps will help you know when you have a chance to see the beautiful Aurora Borealis.

One more thing to note.  The sun goes through an 11 year cycle where solar activity fluctuates in strength.  Right now in 2018 we are pretty much at the low end on the solar activity cycle.  That means solar storms strong enough to produce Northern Lights in Door County will be few and far between.  However, in a few years the activity will be back at higher levels.  When that time comes we should have more opportunities for viewing!